We Have the honour to be the first interview Stomper 98 did since 2015. Sebi (frontman) answered polite our questions and enjoy it!.

“We started in January 1998. Our saxophone player Holgi came up with the idea. Sebi sings since 2004, before that he played the bass guitar. Since the beginning he write most of the lyrics. Until 2005 he wrote most of the music,too. We had a few line up changes and two different singes before Sebi took over the microfone. It was the easiest decision, `cause the idea how the band should sound came from him and Holgi. When we started it was very uncommon for band from Germany using a saxophone and play more melodic. Most of the german bands prefer a rough voice. In summer of `98 we started playing gigs and in fall we recorded the first songs. Over the years we played a lot of gigs, tours and festival with too many bands to count. We played live from Moscow to california, from Oslo over London and back to Berlin.

When we formed the band we spent most of the time hanging out in the streets of our hometown. A lot of boredom and trouble was the result. Many matches at the football ground and saturday nights in bars, clubs and at gigs. Back in these days we had a strong Skinhead crew in Göttingen (our hometown) and we loved to show forces. A bunch of troublemakers. We hated to get involved with politics and the music was Oi!, Ska and Reggae. The police hated what we did in the streets and some of us got „Down by law“. So we spent more and more time with the band instead of hanging on the corner. It was non professional and we never expect anything from anyone. For us playing in front of Skinheads and Punks was everything we want. Funny to see how things changed in the public eye. Our attitude never changed. Our attitude is still the same even the whole punk thing changed a lot since 1998. More different people started to listen to our music and also a lot of critics about the whole scene and our band came up. At the end we can say that we always did what we wanted without sharing the ideas from people outside our own world. Our hometown is kinda alternative and we spent most of the times in leftwing clubs and bars. A lot of talking and discussions when it comes to Skinheads and their way of life. At the football ground from our old home club Göttingen 05 we had fights with Nazi Hooligans and we never had any commons with right wing ideologists to any time. This whole thing got nothing to do with our culture and never did. With a retroperspective view we were naive, we loved action on the streets and we had a lot of fun. Like thousands of Skinheads before and after us. And it was and it is about having a laugh and having a say. Not more, not less.”

– Are you considered self a mix of traditional skinhead lifestyle with a touch of oi!?

“Call it Oi!, Skinhead Rock`n`Roll, Punk, Streetpunk. Whatever. All the same for us. The lifestyle mixed up with the life situation. No jobs, hanging around, alcohol, drugs and pills, and strong working class pride. Skinhead used to be antisocial and out of society. The clothes, the music, the attitude, we didn`t give a fuck about anybody that wasnt in our circle. Even other Skinheads didn`t count if they didn`t like what we do. The whole culture was a gang culture and it still is for us. If you don`t lie us, who cares if you`re Skinhead or not. You know, there are always people who hated what you`re doing, especially when you are playing music. We have friends all over the world and on the other side there are people there who hate us and what we do. Easy to handle. What do we have together with a hip university „Skinhead“ who lives in a fairytale and talk about the traditional Skinhead culture from 1969 and it sounds like he  talk about woodstock. That`s bullshit. Same with the lyrics. We sing about what happened and happen around us. No dreamland poetry out of a Richard Allen book or George Marshalls „Spirit of 69“. That corny bullshit maybe brings you more listeners and everybody hang together and party like the mainstream idiots, but for a band it is very unsatisfactory.

Today the whole Skinhead thing is back from the days and we are totally fine with this. If people try to bring it to a new point, great. Let them all do their thing. We do we what we always did. A bunch of friends playing Oi! Music and we don`t need racist or fascist people telling us what Skinhead is about. They are not part of the culture we love. Period.”

– How borned idea of included a sax in the project?

“To the time we started and all the years before as yougsters we listened a lot to bands like CAMERA SILENS, KOMINTERN SECT, BURIAL, SKIN DEEP, WARRIOR KIDS, MOLODOI, DECIBELIOS, THE LAST RESORT etc. You know, all the 80thies Oi! And Punk with catchy melodies. Also Holgi spent time in Frankfurt before S98 and he met Olaf from german band STAGE BOTTLES and they became friends. He learned to play the saxophone before S98 and when he told Sebi that he play this instrument it was just a second that we wanted to have this as an imortant part of our own style. It was natural how we sound. Not like, hey we wanna sound like this or that band. We just wrote songs and the result was what we recorded.”

– What’s the most important for you?

“As a band? Playing live, writing new songs and meeting friends worldwide. This is much more as we ever expected.”

– You got a long way in the scene, how you see the new generations?

“We are not here to judge the kids from today. It`s a new generation so who we are to tell them what to do? It`s totally different today. Who ever thought that Skinhead bands start to play bigger venues. That there is a infrastructure for Oi bands with labels, zines, clubs and all this is a great thing. And the public understand a little bit more that our culture got nothing to do with racism or nazi bullshit. A much better situation for young people to grow up. Less fights, kess missunderstanding and less bullshit in the news. But more posers, too. A pair of Dr Martens, a big record collection and smart clothes is not everything. For a cult with a big working class tradition you can`t get that from the internet. Of course you can buy everything today from shops and stores, but attitude and behaviour is nothing they teach at university or in facebook groups. Hahahaha, facebook groups where grown up people spread gossips about other grown up people. Society in their darkest times. And people really think that got anything to do with subculture. They act like the common society we try to escape since ages. Stupid fucks.”

– The song “A Way of life” got a fragment of “Skinhead Moonstop”. Which important is for you the skinhead roots?

“That`s where it all came from. It´s an important part of our kind of living. Of course, it`s not 1969/70 anymore and pretty sure if you are act like the kids from back the days you go to jail in a second, but it`s still a big part of our „way of life“. It`s the ground for all the following generations of Skins and Skinheadgirls. And if you don´t respect the roots, how can you be a Skinhead if you really wanna be. “

– You’re Lars Frekeriksen’s friends. Have you plans for make a music collaboration with him?

“He is in the band since Flacke left end of 2015. The distance between San Francisco and Berlin and also that he is busy with RANCID/OLD FIRM CASUALS don`t make it easy. So everytime he can make it, of course we play together and record new songs. Over the years STOMPER 98 work very good as a collective of different friends. The core of the band is the same since 2005 and we have always back up musicians jumping in. That`s how we roll and we none of us got ego problems `cause the music and the attitude is more important as the faces on stage.” 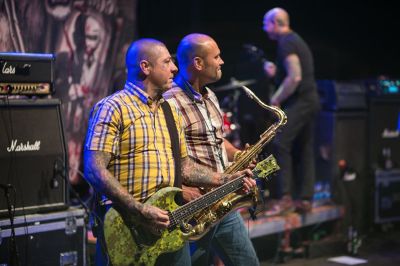 “Yes, we would love to. If there is a promoter who wanna do a gig or a tour, please get in contact with us.”

“In the moment we all sit at home and wait for the end of the pandemic. Beside that we write songs for a new record.

Also we wanna play all the gigs that are cancelled because of Covid-19. That`s all for now. We will see what`s going on.”